On October 28th a woman named Mindy Rossette posted the following sketch and message on my Washington County Paranormal Facebook Page. Mindy has graciously allowed me to publish it on my blog in the hopes that someone else may come forward with a sighting, or perhaps offer some explanation as to what she and her daughter encountered.

“At the urging of friends I am reaching out to you about an encounter me and my teen daughter had at about 9:40 pm on September 17th. We were traveling near Highway K and 167 near Holy Hill.

“I can only say [the creature] was maybe 4 ft tall, hairless, grey/brownish, and running on its hind legs. It seemed to brace for impact as my car barely missed it. Below is the picture I drew as soon as i got home. Any ideas?”

The countryside surrounding Holy Hill has more than it’s fair share of anomalous activity. In 2006, a large bearlike animal with canine characteristics dragged a dead deer from the back of a county contractor’s pick up truck. The authorities recorded the encounter as a “yeti sighting” and started a minor media frenzy, attracting Bigfoot Hunters from as far away as California. Following the Bigfoot clamor, numerous eyewitnesses came forward with sightings of various strange animals ranging in description from the infamous Bigfoot, to odd bear/wolf hybrid creatures.

Also nearby is Hogsback Road, an area that local teenagers claim is haunted by an even stranger cryptid, Goatman. Goatman is exactly what he sounds like, a strange humanoid with caprine characteristics. To my eye, this creature, while almost assuredly not a human/goat hybrid, could put someone in mind of the legendary creature, particularly with those very unsettling legs which seem to have backwards bending knees.

Stories about Goatman have been told around Washington County campfires and in parked cars since about the late-1960s. While the creature seems to be mostly urban legend, creatures with a blend of human and goat attributes have been reported sporadically across the United States, with the oldest I’m aware of occurring in 1830s Minnesota.

When I told Mindy that it reminded me of Goatman, she’d never heard of the creature. When she asked me what Goatman was, I was hard pressed to answer her.

She continued with her description:

“It’s elbow was set low on the arm. Legs seemed to bend back at the knee like a dog’s. Muscles very defined. Thighs especially. I couldn’t make out the hands because of the way it was running. I couldn’t see the feet as I couldn’t see past the car hood.

“Instantly i knew this was something incredible. We were shocked and confused trying to figure out what the heck we just witnessed. We don’t live far from that rural area so we are pretty much freaked out to venture outside when its pitch black. It’s something we’ll never forget. It was a monumental moment. The vision of this thing is etched in our lives.

“I really want to know what that was. It was tangible. Not our imagination. I wish I’d seen the face but it braced itself and tucked its head down. I wish i would have hit it. Not to cause harm, [but just so people won’t think I’m crazy].”

Those who have seen the drawing so far have remarked that it looks extraterrestrial to them, likely because of that large head that resembles the classic “grey alien” description given by alleged UFO abductees.

I’ve pondered the drawing all weekend, and the only rational explanation I can think of isn’t rational at all. It looks vaguely like a tailless kangaroo or wallaby, but just how did one of those make it’s way to Southeastern Wisconsin? One can’t solve a mystery by introducing a second, equally puzzling mystery.

Interestingly enough, I talked with a man two weeks ago following a Downtown West Bend Ghost Walk who described a creature similar to one Mindy saw outside of his house in Southern Kewaskum. A few winters ago he heard gunshots outside. He peered out his window, expecting to see coyotes running down the snowmobile path near his home. He instead saw a 4-foot tall, grey-brown creature with a horselike head running extremely fast down the snowmobile trail before it dashed away into the woods. The only major difference separating the thing he saw from the one sketched above was that it was covered in shaggy fur.

If anyone else encounters something similar to either of these creatures, or has any information pertaining to Mindy’s upsetting encounter, please contact me. 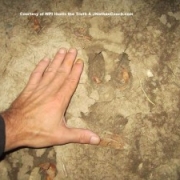 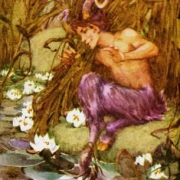 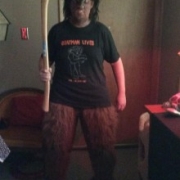 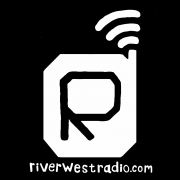 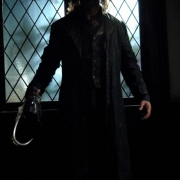 What I Did On My Winter Vacation
Scroll to top