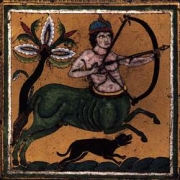 While digging through musty old books and obscure Fortean journals researching my book Goatman: Flesh or Folklore? I came across many exceedingly peculiar sightings of “mythical” creatures. While searching for satyr sightings, I’d stumble across the occasional encounter with a centaur!

Centaurs were liminal beings from ancient Greek mythology that were most often depicted as horses with a human’s upper body sprouting from the withers. According to myth, these hybrid beings ultimately came into being when Apollo, the God of Music and Light, impregnated Stilbe of the nymphs—a race of feminine nature spirits. Twins were born. One named Lapithus, grew into a valiant warrior. The other, Centarus, was deformed and took to mating with mares in the countryside. The result of these unnatural copulations, were the centaurs, which would forever be at war with the descendants of Lapithus.

But despite this less-than-honorable origin, centaurs played dual roles in Greek myth. Their human/animal qualities led to them being depicted as fierce, and untamable, much like a force of nature, probably because of their relation to the nymphs. Contrarily though, given Apollo’s status as an intellectual deity, they just as often played the role of teacher in many tales. Perhaps the most famous centaur was Chiron, who taught many mortal boys art, music, and war. Among his students was Achilles, the famous hero who fought and slayed Hector during the Trojan War, as well as Jason, who quested with the Argonauts to retrieve the Golden Fleece.

Graham J. MacEwan’s work Mystery Animals of Britain and Ireland contains a description of a very peculiar sort of centaur. In the spring of 1966, John Farrell and Margaret Johnson were driving through the Irish countryside of County Louth, just outside the city of Drogheda, when they came upon an enormous quadruped blocking the road. It resembled a huge horse, except for its hairy, manlike face and grotesque bulging eyes. The creature blocked the road for a full two minutes, while Farrell and Johnson were paralyzed with horror. Eventually the thing vanished, allowing them make an escape.