Now Available Wherever Books are sold! 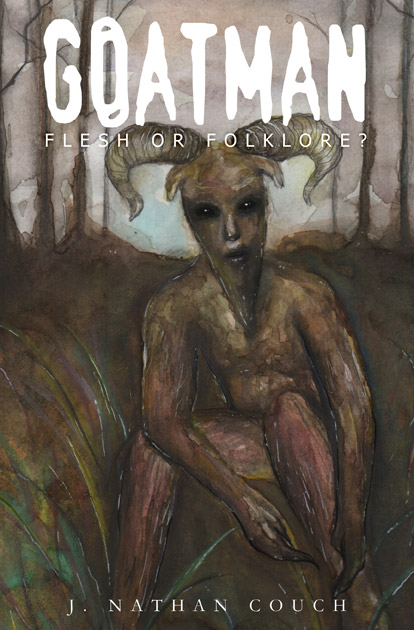 Legend says that all across America, a monster lives in the darkness. It lurks on the boundaries of suburbia mere miles from our homes. Huge, foul-smelling, and murderous, it has many regional names but most people refer to the creature by a simple, straightforward name—Goatman.

Some stories say the Goatman is a hairy humanoid with a goat-like head that walks about on either two or four legs depending on the circumstances. Others say he’s a horned man with a furry, hooved lower-half much like creatures from Greek mythology.

Of course, just about everyone says it’s all just an urban legend. Except for those who’ve came face-to-muzzle with the Goatman himself, or the families of those who’ve died while trying to encounter the monster.

Join author and paranormal investigator J. Nathan Couch as he collects sightings of Goatman and all his caprine kin including the Pope Lick Monster, the Beast of Billiwhack, Sheepsquatch, the Lake Worth Monster, and a hoard of minor hooved horrors as he tries to separate fact from folklore on a journey that takes you from Wisconsin, to California, to Maryland and back again. Beware the Goatman!

Here’s what people are saying about Goatman!

Lyle Blackburn wrote in his Rue Morgue column, Monstro Bizarro that ” Couch’s writing is smooth and easy to read while maintaining a good balance between skepticism and open-mindedness. He goes where the research leads, allowing his conclusions to reflect only that which can be drawn from the evidence.” He continued that Goatman is an “enjoyable read that provides new insight into these cases whether you’re interested in the cryptid aspect or simply monster folklore.”

Ken Gerhard, author of Encounters of Flying Humanoids, declared “… Thoroughly enjoying this book at the moment. Extremely well researched and written. I highly recommend it to anyone who is interested in mysterious and seriously weird creature accounts.”

Monster Hunters author Tea Krulos writes “Couch does a good job of entertaining the [legends], but not endorsing them as fact. Because the idea of a half goat, half human stalking through the woods to head butt you is ridiculous…(wait a minute—do you hear that horrible bleating sound?)…or is it?”

Loren Coleman, author of Mysterious America and the director of the International Cryptozoology Museum placed Goatman on his list of the Best Cryptozoology books of 2014, bestowing it with the title of ‘The Best Weird Cryptid Book of 2014.’”

And most recently, the 11/2015 issue of Fortean Times declared, “Couch is no slouch… Goatman: Flesh or Folklore should become a template on how to investigate reports of cryptids, and every fortean should read it.”