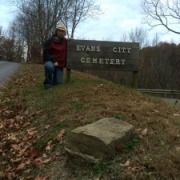 With the Downtown West Bend Ghost Walk season officially over and Goatman: Flesh or Folklore? officially published, I’ve been able to actual LEAVE MY HOME, a risky venture I rarely attempt.

This year I traveled to the far flung mid-Atlantic to visit some good friends in Frederick, Maryland. I despise airports, so my wife and I decided to turn it into a road trip. Frankly, I’d rather  drive for 12 hours then deal with the TSA.

I had a lot of fun was had once we arrived. We visited several infamous American Civil War sites including Gettysburg, Antietam, and Harper’s Ferry. I had a couple of paranormal experiences while at some of these locations. Some of it will appear in upcoming articles at CultOfWeird.com, while other experiences will end up in a new book I’m working on (details coming as soon as I know what the hell I’m doing).

No road trip is complete without stopping along the way for some roadside weirdness. On our way past Pittsburgh, PA I realized we were about fifteen minutes from Evans City, PA, the location where they filmed much of the 1968 George Romero classic Night of the Living Dead (NOTLD). As most people know NOTLD, created the zombie film as we know it–flesh hungry corpses risen from the grave. There would be no The Walking Dead without NOTLD.

The drive back home was just as thrilling. We dipped down into West Virginia so I could visit the Mothman Museum. For those who don’t know, in 1966 this small town had a series of bizarre sightings that ranged from a winged humanoid with glowing red eyes, to UFOs and Men In Black. The entire flap ended when the Silver Bridge collapsed on Christmas Eve, killing dozens. It’s generally believed all those strange events are connected.

But vacation is over. Even though tour season doesn’t start up again until Spring, I’ve been hired to write a comic book script (details coming soon) and I’ve several new books I hope to write (details coming sort of soon), I’ve got lots of blogs and research to do, and I’ll be on several radio shows and podcasts promoting Goatman. Watch this space, like my various Facebook pages, or subscribe to my email list. There is lots of exciting stuff coming up!